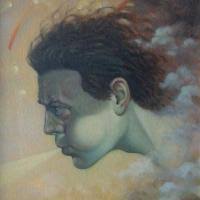 Exhaling is imbuing something in the Universe with your force, exhausting is drawing your power from you as it were waste.

The difference is that of ‘giving’ and ‘losing’ and is initially difficult to perceive as it is subtle, non-physical flow of energy.

Its importance and potential cannot be overemphasized.

Only if one inhales and exhales in a strictly uninterrupted circular way does it become possible to positively control the balance of internal and external forces.

The actual flow of air becomes practically of secondary importance. After a while the body will adapt to this way of breathing and will not need any intention. Acceleration of the breathing rate is done by intention to accelerate the circular speed and not the rate itself. This is an important difference because during ‘normal’ voluntary control a conflict between voluntary and involuntary muscle actions arise and out of that a host of problems come about.

We can glimpse a hint of the power of exhaling versus exhausting when we look at the psychological and physiological  effects enforced circular breathing in Leonard Orr’s Rebirthing, Stanislav Groff’s Holotropic Breathing and the Wim Hof Method. These approaches lead to extraordinary experiences and ‘super-human’ abilities far beyond the reach of common imagination.

if the outflow of air is being physically resisted:

typically, the person is invited to think of ‘filling an air balloon’ in order to communicate this all-important detail.

all we have to add the imagination of an energy sphere following an oval (egg-shaped) pattern that after leaving the mouth travels down the chest and into the solar plexus. There, exhalation turns into  inhalation without a reversal point like during a ‘normal’ breathing cycle. The imagined sphere then travels outside and up the spine and enters the mouth cavity from the back, through the neck and forward out the mouth.

Now the internal and external forces will start naturally and unimpeded to balance themselves out and potentiate the human being as a whole. This we call VORTEX Breathing.