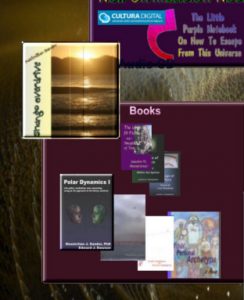 “The word is not the thing.” Korzybski’s mantra echoes through the written works of Max Sandor. He aims to point to reality instead of trying to explain it. His writing style avoids attempting to convince the reader of one view or another. instead he pictures models of thoughts, framework of emotions,geometries of relationships, and encourages to imagine and find new models for your world. Evaluation is left to the reader. You will not find moralism or a pointing finger in his works. That said, truth must prevail – Max Sandor does not hesitate to blast hipocrisy and blatant lies if appropriate, even though humor and irony are his favorite weapons.

Max Sandor has written more than 500 articles in English, German, Italian, and Portuguese and has published more than 1,500 pages in book form. He released two Audio CDs and several CD-ROMs. His paintings  and serigraphics prints are scattered around the world and have not been catalogued. A few sculptures are on display at his home in Brazil.

There is an author’s page on amazon.com where you can find and purchase the following books by Max Sandor:

The printed edition of Polar Dynamics is not available in some regions.

The books published with Scortecci are out of print. Some autographed copies are available for:

The following books in Italian language are out of print. Some new and some used copies are available upon request:

The PhiloFi/Transrealistic collection of early BLOGs/e-zine sequels ‘Logs of JD Flora’ published under the name Joachim Steingrübner at Amazon.com as a trilogy will have a separate section soon. The Italian version of the third volume “Ombre perdute” is out of print.  Collector’s exemplars available upon request.

has been given to the public domain and is not being maintained by the author since 2002. There are several online versions available, the most complete appears to be at the site of the Langkawi Center. Russian translations of some article from the Purple Notebook and a few chapters of Polar Dynamics 1 are here. The most complete set of the Purple Notebook in Russian languade as of today that we know of is here.

As a columnist, Max was writing for Brazil 24-7 during fall 2014 (in portuguese). These articles will need a new repository.

Also in portuguese are two articles based on interviews with Max:

Max Sandor is a multi-instrumentalist and prefers improvisation over repetitions of existing works (which is the ‘standard’ way music is being played today).

The Audio-CD Shango Overdrive is a collection of songs and soundtracks made between 1999 and 2003, initially with the purpose of reflecting archetypal sound patterns and music as demonstrations in workshops. Some of the tracks are traditional songs, the others are of ‘Ambient House’ style with vocals by Max’ wife and partner Heloisa Helena Rosas de Almeida, Ayo Adeyemi, and Max himself. Some samples are recordings of Aaron Miranda on rare and ancient instruments. All titles are available as Audio-CD in the US and as MP3 in all amazon.com regions.

The Audio-CD Riflessioni is a collection of spoken texts from the works of Max Sandor in Italian, English, and German, recited by various speakers besides Max himself. The background soundtracks for this CD were made by Max and other artists. This CD is not for sale currently. MP3s upon request.

Here is an entertaining elogy of Max and Heloisa made by a ‘repetista’ duo and filmed by Max: Repentistas de Salvador para Max e Heloisa, 2002.

A documentary of Jair de Ogum‘s ‘terreiro’ was made and edited by Max in 2002.

A video by Olodan based on the poem by Max Sandor is available in English, Italian, and Portuguese versions on youtube.com.

Also on youtube as well as on amazon.com are versions in several languages of the ‘2012 Countdown Worldtour’ trailer made by Trent Crace based on a text by Max Sandor and Heloisa Helena Rosas de Almeida.

A video trailer about teamshape was made by Max Sandor around 2003.

A talk and discussion (in portuguese language) about the triangle of ‘Science, Technology, and Religion’ at the Café Filosófico in Campinas, Brazil, has been posted in various places and on youtube of course.

The following CD-ROM works are out of print:

.. in preparation. Here is a one minute soundbite: 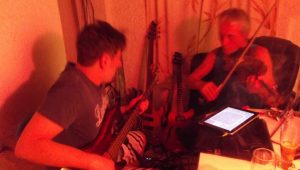 Jammin’ at night (with Oscar Marzorati on the bass, photo: Mariana Damásio, Dec. 2015)

Live Poetry in the German language recited by Max with various instruments like rabeca (violin), cello, guitar, and organ (synth), from Goethe to Brecht, Tucholsky, Ringelnatz, and Max Sandor himself. 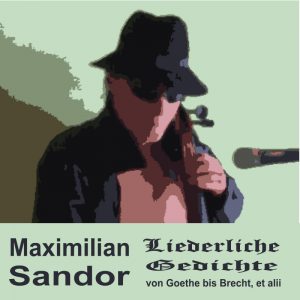 This overview is far from complete. We are working on getting all the links together and expounding the content descriptions.