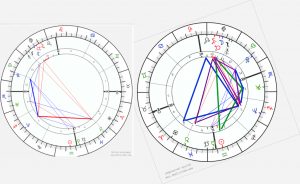 Ifá and Astrology (or: Why your natal chart is important even if you do Ifá)
by Max Sandor

Historically, both Arabian Ifá (“ifaya”) and European Ifá (“Geomantia”) have had a link to astrology. Little is still known about it except its mathematical tools and the set of planets used and the European Geomantia deteriorated into mere fortunetelling some centuries ago.

Why would we bother? Don’t we have already sufficient access to the ‘cosmic play’? Astrology provides an ever changing backdrop to the play of Orisha archetypes and sometimes this backdrop can interfere substantially with the archetypal game. It is the physical side of the game, contrasting the play of the spiritual side of Orishas and Ori, the Higher Self.

The following informations are based on direct observations and processing of myself, Max Sandor, Chris Melchior, and Ed Dawson. There is no other material of this kind available in the moment even though the field of descriptive Astrology itself is vast and detailed.

The Orisha archetypes as expressed by humans are like children that invade a playground. The toys they find there change their position every second and provide a grand circus, making the game more interesting and varied. Sometimes, however, such a ‘toy’ may act in various destructive ways and, even knowing how to handle problems with the Orisha games, we as the ‘top players’ need to fix the basic landscape.

This landscape, of course, is the constellation of the planets at the time of birth. Observation shows that a COPY is made of the planetary chart and installed within the morphic field (‘soul part’) of an ‘incarnating’ entity. From there on, aspects of this chart or map, will be activated throughout life in various situations and times. It is the internalized copy of this map that determines its working in the psyche of the human.

In contrast to the Orisha, the Zodiac forces are basic attitudes and mini-scriptlets at the most. Its powers are moving with the cosmic timetable and not freely around like Orisha. The activation of the Zodiac forces depend ENTIRELY on their geometric positioning to other forces of its kind. Throughout a period of history, only certain constellations are possible, which is limiting its possible combinations for a single human being considerably.

Classical astrology is a descriptive art. It is very helpful in understanding seemingly unchangeable behavior patterns. It is usually not able however to modify any feature of the astrological system. What we started to do in a systematic way is to deactivate limitating aspects and in some cases activate positive patterns. Be aware, that the entire phenomenon of planetary maps for human behavior is a severly limitating phenomenon and even ‘positive’ aspects should therefore be replaced in time with pan-determined action. Beyond a generic astropsychology, We work with resonance effects, either in a personal setting (“session”) through ‘tuning’ or through physical placement (“Skywork”). Similary, we can change do “phase shifting” which turns an internal negative opposition into a constructive cooperation.

Other possible actions that are beneficial in some cases include changing the horizon (equal to rotating the map) and swapping the global viewpoint (putting the ascendant to the right side). For advanced persons, We can also desensitize the entire map and its initial construction which requires interfering with the most recent Bardo (the between-life-area) of the person.

To maintain ‘social skills’, it is advisable to be familiar with the basic astrological archetypes and to know how to operate them, if so wanted, BEFORE intercepting the functions of a natal chart. In general, direct knowledge and familiarity with the Zodiac powers provides a quantum leap in social interaction.

Because of the new possibilites that arise when activating the Zodiac forces consciously, we witness the rise of a fascinating paradigm of understanding and dealing with human behavior patterns. This new paradigm does not replace traditional astrology or astropsychology but it is a practical solution to specific problems commonly found in a person’s planetarium.

Remains to emphasize that our main goal consists of ultimately TRANSCENDING all archetypal patterns in order to restore pan-deterministic action of the Being itself and that working with Zodiac forces often is but a necessary stepping stone on this path.